Ryan played in the BCHL as a 15 year old for the Langley Hornets where he was named the BCHL Rookie of the Year. In 1999, he was selected 1st overall in WHL draft by the Medicine Hat Tigers, where he eventually captained the team, leading them to a WHL title and birth in the Memorial Cup tournament. As a dual-citizen, Ryan was selected to represent both countries at the U17(USA), U18 (Canada), and U20 World Junior (USA) tournaments.

In the 2000 NHL draft, Ryan was selected 238th overall by the New York Rangers and enjoyed a distinguished NHL career playing with New York Rangers, Toronto Maple Leafs, and Arizona Coyotes for a total of 228 games. He also played 275 games with various AHL teams including the Hartford Wolfpack, Toronto Marlies, San Antonio Rampage, and Portland Pirates. Ryan later continued his professional career in Europe playing six seasons from 2012 to 2018 for the HC Skoda Plzen in the Czech Extraliga where the team captured an Extraliga Championship.

After retiring from professional hockey, Ryan served as an associate coach with the BC Hockey North West U18AAA Hawks for 2 seasons underneath Chris Shaw. Ryan returned back to Head Coach after returning from being the Associate Head Coach for the Coquitlam Express of the BCHL with Dan Cioffi in 2020-2021. Ryan lead the North West Hawks U18AAA to 25-8-2-1 record and where finalists in the BCEHL Championship 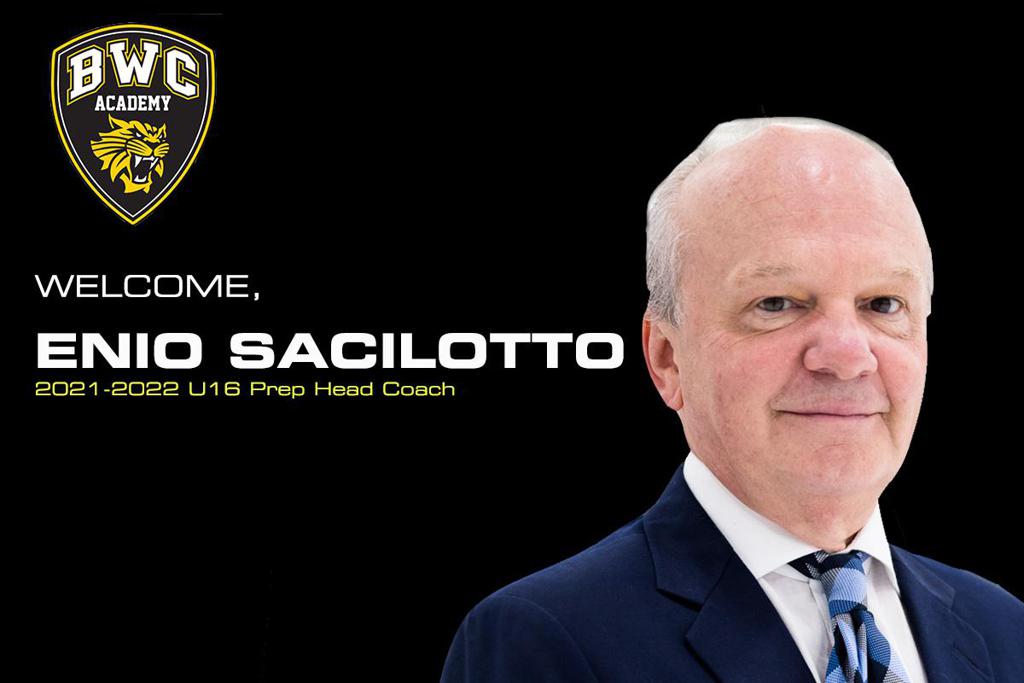 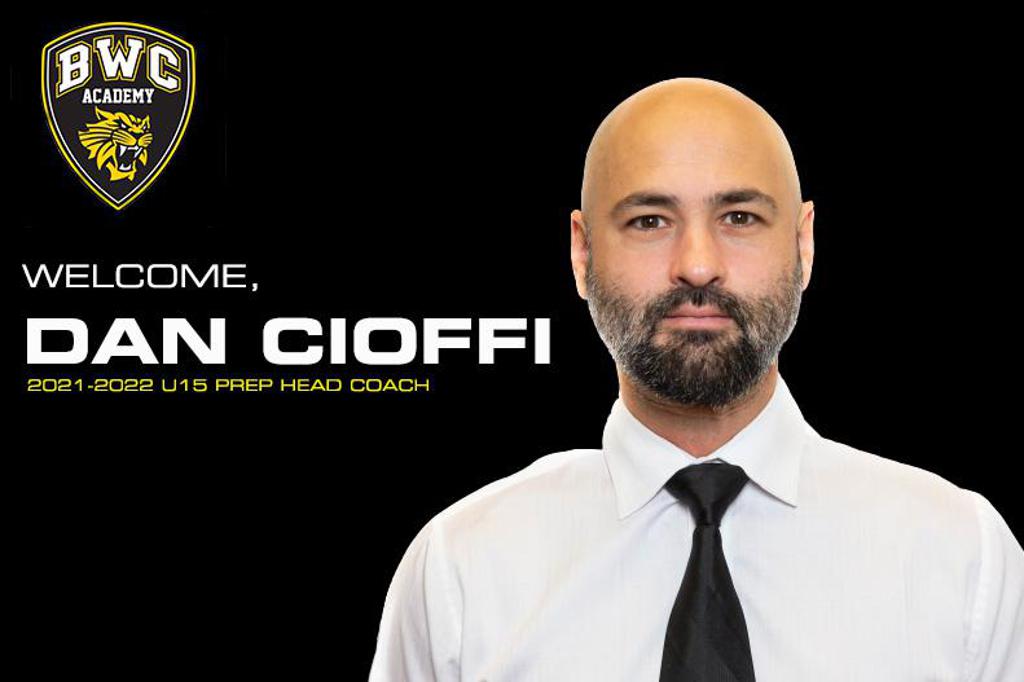 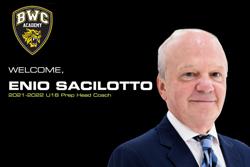 Burnaby, BC -  Enio Sacilotto is going into his 39th season as a hockey coach but his first year with the Burnaby Winter Club Hockey Academy.  Enio is a native of Vancouver; he resides in Burnaby with his wife, Jeanne.  They have two children, Katherine and Stephen.  He graduated with a Bachelor’s degree in Sports Science and Physical Education in 1983 from Brandon University and began a long coaching career.

Coaching stops for Enio include professional leagues in Italy, Switzerland, England, Denmark, Norway, and Croatia.  He also served as the Coach and General Manager of the Penticton Panthers of the BC Hockey League and seven seasons with the Victoria Royals of the Western Hockey League.  Most recently, Enio coached the North West Hawks U-15 team and at the West Vancouver Hockey Academy.

Enio also has a wealth of international experience, leading the Croatian National U-20 team and U-18 team, winning a bronze medal in 2009.  He was an assistant coach with the Canadian U-17 program helping lead Canada (Team Pacific) to a Silver medal at the World U-17 challenge in 2014.  Currently, Enio works with the Croatian Ice Hockey Federation, where since 2017, he is the Head Coach of the Senior Men’s team, U-18 team and assists in player and coach development.  Team Croatia Senior Men were silver medalists in the 2019 World Championships.

In addition to coaching, Sacilotto is fluent in four languages ​​and successfully manages his own company, International Ice Hockey System Inc. (since 1982), which organizes summer hockey camps, coaching clinics, mental coaching seminars.  Enio does one on one mental coaching and is an inspirational speaking.

Enio has worked with athletes and coaches of all ages and levels all over the world. He is very knowledgeable in hockey and mental training. He puts heart and passion into his teaching, and his primary goal is to help individuals and organizations reach a higher level.

Enio’s warm personality and exceptional people skills help him captivate any individual or team.  He is easy to work with and inspires everyone he works teaches. 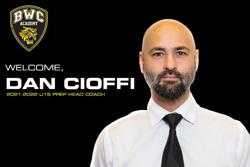 Burnaby, BC. –  Burnaby  Winter Club Academy  (CSSHL) Hockey Director  Richard Matvichuk has announced the appointment of Dan Cioffi as the new head coach for the U15 PREP team at BWC.

Dan has an extensive coaching resume that includes Head Coach experience at the BCMML, PJHL, and most recently, the BCHL level. Originally born in Montreal, Dan grew up in Whitby, Ontario where he played Junior ‘A’ Hockey with the Pickering Panthers and later went on to the University of Ottawa where he graduated with an Honors Degree in Human Kinetics and interned as assistant strength coach with the Ottawa Senators. Dan later completed his M.B.A. at NAU-National American University (2018).

Dan’s coaching experience has seen him as an Associate Coach with the Burnaby Express BCHL between 2007-2010. Dan later moved on from the Express to become the Associate Head Coach with the Salmon Arm Silverbacks BCHL (2011) and then was Director of Player personnel for the Trail Smoke Eaters BCHL (2014-16). Dan was also behind the bench winning a PJHL Championship with the Delta Ice Hawks of the PJHL. On top of coaching, Dan has been a Scout with the Spokane Chiefs- WHL.

“I would like to thank Richard and BWC for the opportunity to coach the U15 PREP team. This is a flagship team which has had great success and coaching over the years, and I look forward to helping carry that same standard of developing great teams and players both on and off the ice.”

Hockey Parents save a life at Midget game 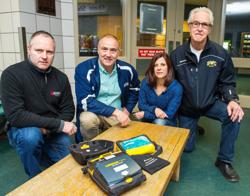 From the Vancouver Sun

METRO VANCOUVER -- The teenage players on the Burnaby Winter Club midget hockey team may have won last Thursday’s game against Cloverdale, but it was a group of parents who made the save of the day.

Moments after his son’s team scored the winning goal at the North Surrey Recreation Centre, one of the Burnaby fathers collapsed from a heart attack.

As the 50-year-old man lay on the floor unconscious, paramedics were called. But if it hadn’t been for a few CPR-trained hockey parents and a talking defibrillator, the man might not have survived.

The Burnaby team scored with 30 seconds left in the game for a 2-1 win, so there was a lot of cheering and noise — then confusion and chaos as several parents from both teams rushed over to the man, who had fallen down some steps.

Hockey dad Gerry Lieper, whose son Parker plays for Cloverdale, said at first he didn’t know what was going on, and thought the man might be having a seizure. Then fellow team dad Garry Bruce yelled “Get the defibrillator,” and they yanked it off the wall, causing an alarm to go off.

“Everyone was standing around not knowing what to do at first. It was freaky,” he said. “His wife was crying and panicking.”

Burnaby parent Lucia Milosavljevic is a nurse in the cardiac unit of St. Paul’s Hospital, so she checked for a pulse and couldn’t find one. She began CPR and helped put the defibrillator on the man’s chest.

“It was the slickest gadget,” Lieper said. “It told us to call 911. … And then it was checking his vital signs and checking for a heartbeat.”

Bruce, also trained in CPR, said he felt anxious in the moment and was trying to get everything done quickly.

In 2013, the federal government began rolling out automated external defibrillators, known as AEDs, at ice rinks across Canada, as part of Prime Minister Stephen Harper’s election promise to fund a $10-million project to upgrade 3,000 arenas. The B.C. Heart and Stroke Foundation, through its own fundraising and a matching donation from the provincial government, already had a program to put AEDs in recreation centres in B.C.

Milosavljevic, whose friend’s 35-year-old husband died eight years ago playing hockey before the devices were introduced at rec centres, said the Burnaby father did not receive a shock from the defibrillator. “It won’t shock if you have already flatlined,” Milosavljevic said.

But the talking device told the parents what to do.

“The fact that we had access to it was really important. Because of my friend and all the fundraising she has done on behalf of her husband, now all the community centres and ice rinks have them,” Milosavljevic added.

A heart attack, which occurs when a blocked artery cuts off blood to the heart, is different from going into cardiac arrest, and should not be treated with a defibrillator. The automated defibrillator scans the patient and lets the users know whether the patient needs a jolt.

Milosavljevic said her friend’s husband was in cardiac arrest and needed a defibrillator, and if the rink had one he might still be alive. She said during Thursday’s incident, they didn’t know what was happening, so it was extremely helpful to have the automated defibrillator.

“It advised us not to shock and continue with CPR. And every two minutes it analyzes the rhythm to see if anything has changed. If it requires a shock, it will shock. But you don’t know that if you don’t have the equipment,” she said.

The three parents, along with Paul Conners, the manager of Burnaby Winter Club midget hockey, took turns doing compressions until the paramedics arrived.

Conners described the situation as surreal. “If this had happened half an hour later while he was driving the car or in his sleep, I think the outcome would have been much different,” he said.

The man apparently had surgery this past weekend and is expected to make a full recovery.

In Surrey, all of the rec centres and hockey arenas now have AEDs, according to North Surrey Recreation Centre manager Sherri Gosse. Although she didn’t know how many times it had been used at North Surrey since it was installed in 2009, she said Thursday wasn’t the first time it had been deployed.

Shelley Parker, the resuscitation program manager for the B.C. Heart and Stroke Foundation, said an average of 2,000 people die each year from cardiac arrest in B.C. She said although they are not provincially mandated, most B.C. recreation centres now have AEDs.

Also, many hockey clubs have their own with the families chipping in to buy the machine, which costs between $1,500 and $2,000, including the Ogopogo senior men’s team in Kelowna, which last year used the device to save two players, one in March and the other in August.